This article is produced in collaboration with our partner StartupAmsterdam

The well-known Amsterdam-based payments platform Adyen has published its H2 2020 Shareholder letter and financial statements. Its details reflect a lot on what has happened in the fintech space last year, along with the payment company’s upcoming plans. Here are five key takeaways from Adyen’s H2 2020 financial results.

Processed volume up 29 per cent year-on-year

As per Adyen’s report, the volume of processed transactions is up by 29 per cent year on year, which amounts to about €174.5B. At the start of H2 2020, overall processed volume recovered to pre-pandemic levels and exhibited an upward trend. Adyen notes that there was an uptick in the online retail volume that followed physical store closures in the first half of the year. This trend continued well into the 2nd half of 2020. Volume in the travel sector remained below pre-pandemic levels.

Adyen recorded peak volume during the shopping holiday season, spanning across days such as Singles’ Day, Black Friday, and Cyber Monday. POS volume for H2 2020 was €21.3B and it comprised 12 per cent of total processed volume, compared to €18.2B and 13 per cent in H2 2019 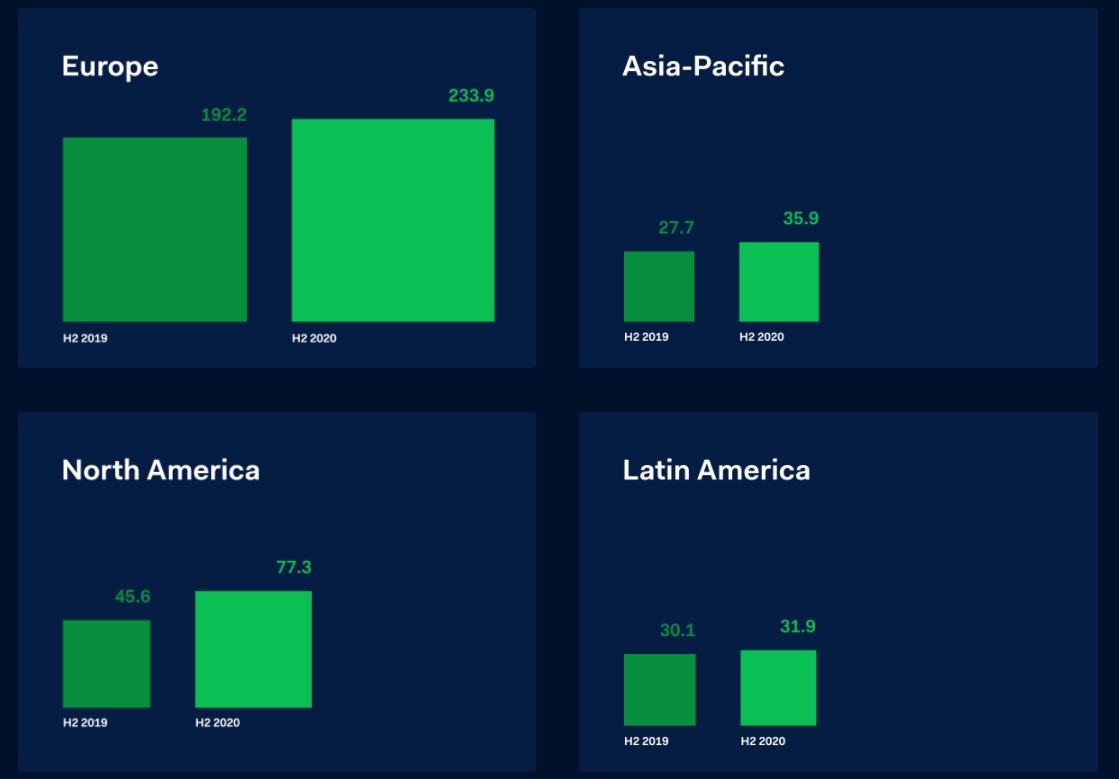 As the processed volume increased, the net revenue registered by the company also skyrocketed as it hit €379.4M in the second half of 2020, up 28 per cent year-on-year. For the entire year, the company’s revenue was up at 28 per cent and totalled a whopping €684.2M. There was a notable diversification across regions, which enabled Adyen to post strong growth. Europe remains the largest contributor to the fintech’s net revenue at 62 per cent, followed by North America (20 per cent), APAC (9 per cent), and LATAM (8 per cent).

According to the company, offering its merchants the best technology and support is a key focus area for it. It claims that the way Adyen builds its team is indicative of that – 43 per cent of new hires in commercial roles and 42 per cent of hires in tech. It added 299 FTE in the second half of the year, so as to pave the way for long-term growth, claims the company. The Adyen team now totals 1,747 FTE. Notably, Amsterdam has the company’s highest number of FTEs – 1,011.

Operating expenses go up for Adyen

While the above mentioned key points paint a clear picture of how well Adyen is performing, there’s more. The company has also posted its financial objectives. In a brief overview, it mentions how the fintech will aim for continued growth for its net revenue and improve its EBITDA margin. It also sets a goal to maintain a sustainable capital expenditure level of up to 5 per cent of its net revenue. You can read about this and more in detail here.

Innovation against climate change: what Blue Tulip Awards’ experts on Climate & Energy are looking for

Personio to open Benelux office in Amsterdam; looks to scale up total headcount by 300 this year